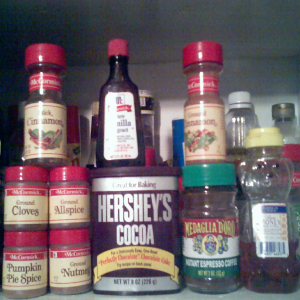 Consider a world without spice what would it be? Bland, Uninteresting, tasteless. Now when you add a little flavor to things even the most mundane and predictable beverage can jump.

Now Coffee is neither mundane nor predictable, the subtle variations in flavors, and roasts are more than enough variety for some. I simultaneously subscribe to both schools of thought on this. One one hand my daily cup pot of coffee is plain black coffee, coffee flavored coffee to most. There are times when IÃ¢â‚¬â„¢ll try other roasts but normal Coffee is king.

And then there are moments in life which require spice! Evenings at home when its cold outside a dash of nutmeg might soften the chill, a splash of Vanilla Extract can chase away hard water. Everything has its place. considers this a fledgling guide to the spicing of coffee, as I see it. As always comments are welcome this is a dialog rather than a handbook.

First things First what coffee to use? How to make said coffee? Both of these are entirely up to you. I have two simple suggestions when creating spiced versions of your normal cup of Joe.

Instant Coffee gets spiced after the fact: After you have added the boiling water to the instant coffee, and after you have sweetened to taste. This is very important because sometimes the addition of spices can initially mask the sweetness of a beverage until one is well into it. And at that point it may very well be too sweet or bitter on your palate to continue.
Drip Brew, Infused, Peculated Coffee gets the spices added to the grounds: The reason for this is to extract as many of the oils from the spice as possible and include them in the beverage. More spices can always be added later but this method produces a more even flavor after all is said and done.

Pre-Ground: Cinnamon is a very popular condiment when it comes to coffee and can easily pull even the most vile brew out of the wastebasket. Oily Coffee? Exxon Valdez in your java? a bit of this spice goes miles towards both absorbing the oils and infusing a flavorful mask over the already suspect brew. A slightly woody taste with a sharp edge cinnamon is one of my favorite spices, but it does have a dark side.

As a spice with a bite, a sharp taste to it, a very distinctive taste, when added to already bitter coffee this taste sensation can enhance the effect. One way not mentioned in the episode to fix this problem is to add creamer. I traditionally take my coffee black with no sweeteners so the addition of spices needs to be able to stand on its own.

Stick Cinnamon:Do yourself a favor and try this some time with a cup of coffee around the holiday season. Like most spices in the raw tha flavor takes a little bit to infuse into the drink in question. give it time and enjoy.

Nutmeg: Nutmeg as it were is a very woody spice. Where cinnamon is a sharp textured addition, nutmeg is a smoother, earthier addition to any drink. Commonly associated with Eggnog, and certain Cocoa recipes. Nutmeg will not mask an oily cup of Joe. But rather it helps you out of a bitter coffee jam. Something about the flavor profile brings the natural sweetness of the coffee out. Not nearly as much as something like Cloves but still its there none the less.

One word of caution with this spice is that moderation will take you miles on your journey. This spice tastes wonderful, a veritable explosion of flavor on your tongue   in small doses. But over saturate the coffee and you might want to water some plants with it instead, its a fine line but once it has been crossed There is no help for your beverage.

Pumpkin Spice: This is a subtle spice, much more a mix of different ingredients that lend themselves to baking with pumpkin. However the special blend also tends to dip right into the memory and bring forth a decidedly fall feeling for the brew it is added to. IÃ¢â‚¬â„¢m the first person in line when it comes to fall styled confections but this spice can easily be overdone, be careful.

Cloves: This is one of the stronger spices in your arsenal. It adds a robust woody flavor and a rich earthy overtone to anything it touches. Alongside Cinnamon this spice is one of the most pleasing scents to most peopleÃ¢â‚¬â„¢s noses. It is a touch more exotic than the aforementioned Cinnamon. but this spice can rescue even the most destitute cup of coffee. about the only thing it canÃ¢â‚¬â„¢t mask is soap in the mugÃ¢â‚¬¦ ::shudders::

Most people have had Cloves at one point in their lives or another but few can identify the taste and the scent right out of the gate. A spice commonly associated with Ham and the other white meat this spice has surprising range. Pair with nutmeg on a cold winter evening for a down home cup of goodness.

Vanilla Extract / Bean: Few spices, extracts or sweeteners can lay claim to the widespread acceptance the Vanilla has attained. French Vanilla is probably the second most common flavor of creamer, syrup or coffee out there. And for good reason. VanillaÃ¢â‚¬â„¢s sweet scent and light but deep flavor profile tend to sooth out coffeeÃ¢â‚¬â„¢s natural bitterness. For a fun time throw a vanilla bean into the water you boil for an instant sup of joe. Or drop a couple of splashed into a cup of instant to remove any hint of instant aftertaste.

Little know fact here, since flavor extracts are infused into a alcohol base they make wonderful remedies for hangovers when added to coffee. A little hair of the dog that bit you. a quarter teaspoon of Vanilla extract in a large mug of coffee can remove that pesky headache and steady you, at least it has worked for me in the past.
Cocoa: Ah the wonderful world of Mocha. A common and relatively new obsession with baristaÃ¢â‚¬â„¢s of late. Everything is coming in Mocha flavor now. But a significant amount of the chocolate flavored coffee products come with sugar added in. And thats just not how I roll. Cocoa is a bittersweet chocolate powder, commonly used in baking, this spice can add a deep rich texture to your cup of joe, not too suitable for tea, as the particulate nature of the powder clouds the drink and masks the herbs in an unpleasant manner.

For a rich flavor combo try adding Cocoa, Nutmeg and a dash of Cinnamon to your cup for a n explosion of textures. You will have to sweeten this brew to override the significant bitterness of some of the ingredients, i would suggest a raw sugar for its richer more natural flavor.

I figured a separate category was due here as sweeteners are uniformly applied after the fact. And each one has a unique flavor profile. We are also leaving out the Artificial sweeteners, if thats your bag then enjoy and you already know what you like.

Honey: We can consider this the wild card entry into this category, not because it is not used in coffee, but rather because there is almost no consistency within this category. The flavor varies from season to season, type of pollen used. Clover is most common among the pure blends. Honey can be a great addition to any cup of coffee and can make even the blandest blends spark with flavor. A fun   side effect i have seen is that unlike other sweeteners Honey can cover a cup of burnt coffee, or oily coffee much more convincingly.

Special note to allergy sufferers, small batch honey and boutique suppliers tend to have a higher pollen count in their honey and that can drive your already taxed allergies through the roof. This is especially true during the spring months when the pollen is most pervasive.

Yet one more side note, not that your infants are going to be slugging a cup of joe next you you but it bears saying. Botulism can occur in infants given honey before they are 1 year old. Most studies say that less than 5% of honey contains even trace elements of botulism spores, but as with anything dealing with infants better to be safe than sorry in this case.

Refined Sugar: Ahh the Classics, canÃ¢â‚¬â„¢t mess with them now can you. Do I really need to explain this one? Ok here we go. The white refined sugar has a decidedly predictable flavor profile, you know what to expect and thats exactly what you get.

The only mention we should throw in here is beware of the overall similarity to salt in textureÃ¢â‚¬¦ trust us this is not a fun surprise.

Raw Sugar: Significantly larger granule size when compared to most other sweeteners. It lacks the purity of refined sugar obviously, and most closely resembles honey in flavour, but with much greater portability. A full, rich and yet surprisingly subtle sweetness. Depending on who makes the raw sugar the flavor can differ slightly. Usually when its used to sweeten a strong drink such as coffee the difference is masked by the overall flavor of the beverage, however differences can be seen in lighter roasts and some teas.

More than you ever wanted to know about sugar