Pumpkin Carving at its best

With Halloween right around the corner, nothing gets the spirit going like carving a pumpkin. I know Paul is talented in carving a pumpkin, but I have not been granted that gift. However, nothing can beat the carvings by Ray Villafane, an artist for Villafane Studios. Some of his carvings are just amazing. 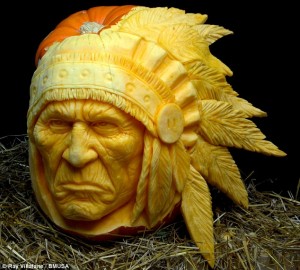 His work is extremely detailed. He has carved some scary looking pumpkins, as well as some portrait pumpkins such as the Predator, Chucky, and even David Letterman. On Monday, Ray was given the oppurtunity to carve away at 2 gigantic pumpkins, one being the world’s largest pumpkin weighing in at 1818.5 lbs.  So at the New York Botanical Garden, His artwork is on display. It is a carving of zombies bursting out of the pumpkin. What better way to celebrate Halloween.