What tie would go with the armor? 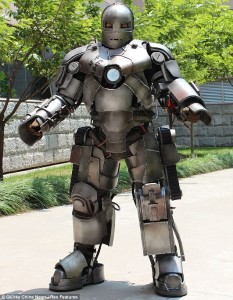 How would you react if you saw a co-worker walk into work in an armor suit? Wang Kang, a telecom worker in Shanghai, was able to experience just that. He was able to construct the first Iron Man suit, also known as the MK1.  After 3 months, and spending $450,  Mr. Kang completed the suit. It is made out of EVA foam, which is glued onto an aluminum. He then used soldering iron to give the rough iron plate effect. He completed the suit by adding pipes and  circuits. 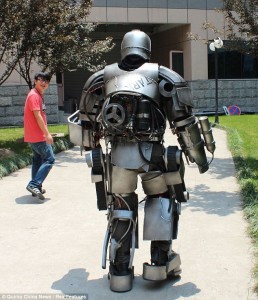 When he arrived at work, some people were stunned, while others were terrified. Wang even claimed to have some women fall in love with him. He went on to say: “They said I am a happy and creative man, and they wanted to know me.” He was inspired by the 2008 movie, “Iron Man.”

At this point in time, the suit weighs aproximatly 50kg, or 110lbs, and takes about 10 minutes to gear up. However, Wang hopes to imrove the design so that it is lighter and easier to put on. He also wants the experience so he can make the MK 2 as well. Tony Stark would be proud.