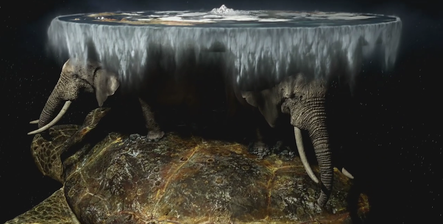 Terry Pratchett is quite possibly the long-lost son of Douglas Adams and JRR Tolkien. His wry english humor has created a wonderful world of fun and fantasy called Discworld. With 38 novels currently in print and a 39th on the way Sir Pratchett has built up an astounding array of information about his mystical world which lies on the back of 4 elephants who stand atop the sea turtle A’Tuin swimming through space.

A realm of bizarre and odd characters, a logical curious Death, bungling wizards and undead right’s activists. All part of the fabric of beautiful and vibrant city. One whose story is  begging  to be told.

In the latest news out of Discworld is that Sir Pratchett has signed on with the same production company which was responsible for The Hogfather, The Color of Magic and Going Postal to do a weekly CSI meets Discworld TV Show. Focused on the City Watch organization in the great city of Ankh Morpork . This would be magical Must see TV. We can only hope to see more of Terry’s brain on the TV and less reality based shows.