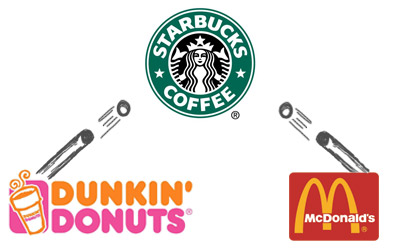 Today Tuesday 2/26/2008 Starbucks will be closing their stores from 5:30 PM – 8:30 pm. During that time Dunkin Donuts will be offering small coffee, latte and iced coffee for a measly .99 cents. So that no coffee lover goes without. They even have a new commercial aimed directly at starbucks.

Starbucks, Dunkin Donuts, McDonalds, three corporate heavyweights have been engaging in a marketing slug fest for the past year. At times it seems like everyone is against Starbucks, and you’d be right. In business you don’t aim to beat number 2, you aim to topple number 1. And there is no bigger One in coffee than Starbucks.

So far McDonalds has been trumpeting their higher ranking in taste tests, their low price, and the fact that they add the cream and sugar for you. Dunkin Donuts has been targeting the odd language that Starbucks employs to describe sizing, Fratalian = classic. Both have very valid points of contention, and both also can not compete with the culture and in some ways mystique that the Seattle based brand surrounds itself with.

Not too long ago Starbucks introduced, as a test, the 1 dollar cup of coffee in some venues. They already have a size not even listed on the menu, its called a “short” for those in the know. They also are trying free refills. Here is why this was a mistake. Starbucks has prided itself on not competing on price, there is an arrogant pride in their pricing, and their ever present logo on street corners. They dare others to sell cheaper coffee, they sell experiance. In a way I give them their due, this store closing is a very good attempt to correct the recent downward course of business. It stays on brand empasizing the brand experiance, not the price as the reason why customers come in.

They are right. competing on price confuses your customers, it shows a lack of commitment to the basic principles you have operated on thus far. They have insisted that people don’t care about price. People care about the feel of the place, they delight in the cache that the cup gives them as they walk down the street. It has become a status symbol, of sorts. I am no fan of their coffee. Its far to dark for my taste, in fact it is damn near burnt. I have had espresso done the right way, it never tastes burnt, but rather rich and deep. Support your local roasters for the true coffee experiance.

Now that they are attending to their brand identity properly perhaps they could focus on the coffee next. 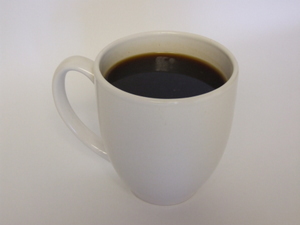 Its Always Fresh at Home :-D