Globalization and Your Coffee Drink 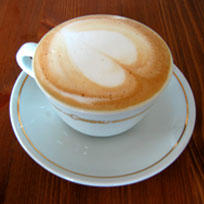 How many of you have sat down either at a Starbucks or some other barista, to enjoy what you thought was a cappuccino? How would you feel if you were the culture which invented this drink only to have it usurped and homogenized, and I mean more than the steamed milk. I was unaware of this but apparently a true classic Italian Cappuccino is a white frothy drink with a shot of espresso poured into the middle, never stirred and drank like a shot of whiskey. Did you know that? Probably not, you as I was until recently, were and are under the spell of globalization. Starbucks and their ilk have stirred the cappuccino for us, they have sullied the true value of a fine drink. Wikipedia to the rescue for a good explanation.
How then would a culture defend itself against such a globalization? Why the only way it knows how. They certify that theirs is the one true Cappuccino and that all others can not be know as such throughout the country. Much along the same lines as the french stance on Champagne, being only a sparkling wine from the Champagne region of France, and nothing else. Some countries and cultures go to extravagant lengths to keep their identity intact. The french have been know to rename english words into french equivalents so as to not dilute the language. That may seem a bit to extreme for English speakers but then again our language is not the one having the screws put to it. Bravo Italia! I hope to have a true Cappuccino, traditionally made one day.