iHurt vis a vis my wallet 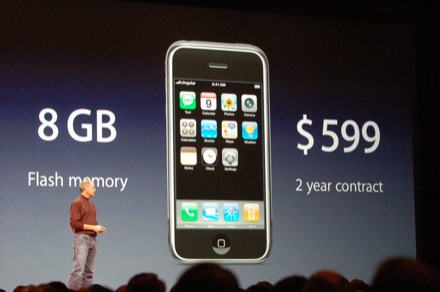 Recent published reports have come out that Apple is betting on the iPhone bringing in the bucks quick. Why else would they build a roughly 50% markup into the 4GB Model and a 53% on the 8GB? Now normally i would cut a company some slack when it came to how much profit they took from a given sale, even laud the company for their forethought. Especially if they can do so without incurring the ire of their customers. But with all of the flack the Apple generated, much of it negative, in response to the announced price why stick to it?
And to drive the point home even further jobs was quoted as saying “What should we charge for the iPhone? We should charge more for this stuff!… “ (see the bottom third of the page for the quote) at the keynote, implying that they may in fact be going on a slim margin to increase the likelihood that people would buck up. Not to even mention beyond this the load of a two year contract with a substandard carrier, who will probably rip you with data charges. We’re not even going to go there.
Now that comment seems more in line with a ‘You people would shoot your dog if i told you to’, type of attitude. To be quite honest with everyone i probably would have let this story slip into the ether without that particular comment.
I do believe that phrasing now comes under the category of unmitigated gal.

Now don’t get me wrong Apple can charge whatever they want, people will pay it and the world will keep on spinning. Hey the iPhone isn’t even going to be the only touchscreen status symbol of a phone out there, as LG released a Prada branded wallet killer at $770.00 US, but hey that comes with a leather pouch. A slide show comparison to make things easier.
The sad thing here is that people will pay, because its Apple and Prada, and as we said the world will keep on spinning. Its just something I wished to share with the group. put this into the more you know category.