By now most people have heard of the situation in Lower Merion PA where a student was given a laptop and information from that laptop was used to  discipline  the kid for something he did at home. There are a lot of  vague  areas about this story so I’m going to try to stick to what we know for certain, anything else only furthers the hysteria which is bound to follow.

We  know  that the laptops given to the students had  software  installed on them which was able to access the webcam and monitor the system in case of theft to allow them to be recovered. We know that a student was disciplined for an action either view through the camera or from an image taken with the laptop camera. This image was obtained through the use of this software by a school official or teacher.  Other students have reported seeing the camera led activity indicator turn on for no reason, although this is just heresay at this pointWhat Does this Mean?

People are flipping out, and rightly so. The School district has turned off this software on all laptops as of the writing of this article.  This is a ridiculous abuse of power, no matter how benign the intent may have been. The problem with software that gives people this ability is the lack of oversight in its use. There are a host of painfully obvious problem with giving anyone the ability to peep into the private life of a teenager through the window of their webcam. History is full of quotes that  extol  the dangers of giving people the  benefit  of the doubt, assuming they will do only good and what happens to even the best people when the temptation is there. It take an amazing amount of hubris to think otherwise. A School punishing a student for actions at home is another issue entirely. We will also leave aside arguments of context, how a simple picture might be worth a  thousand  words but your mileage may vary when trying to figure out what it really is a picture of.

Despite the best intents of laptop recovery, the lack of any apparent audit trail for the software use is the true culprit. Teachers, administrators and school computer techs are a cross section of humanity, and despite the best efforts to weed out the  undesirables  there will always be the chance that something like this could be used for  untoward  ends. They should have know better, and now they will have to pay the price for the mistake. 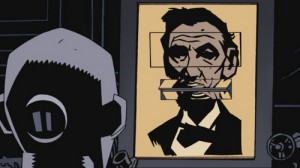 What people are making out of this

The problem is going beyond the school district, now people are shifting their eyes towards to unblinking eye in front of each and every one of them. Is anyone watching me?

Listening to a local radio station this morning, as well as people discus I don’t know how many people called in to say that they heard that anyone could control your computer without you knowing, computer techs could move your mouse and look through all your files. A goodly amount of misinformation, flat out lies and fear mongering is taking place.

In the case of children there should always be an audit trail when anything is done to their machines, especially machines that leave school grounds, as personal workstations. Lets hope that whatever comes out of this this practice is put in place with any service to laptops handed out to students.

Callers on the same radio station began to echo thoughts and conversations i have heard over the past two days. People want to have two things done. First Make software that gives anyone remote access to your machine illegal, and second they wanted to share their own  experiences  with people spying on them, real or imagined.

As a tech who frequently uses software to  remotely  control machines to manage machines under my control, I’m worried. This type of hysteria can lead to legislation outlawing otherwise useful software. I deal with people being uncomfortable with remote access all the time. We choose to use remote desktop when it logs the user off while we work, this way there is no phantom mouse movement. Although  there are other options available for service we find this works best.

So what say you?

Beyond the initial and generally agreed upon screw up by the school district what should be the outcome of this situation?