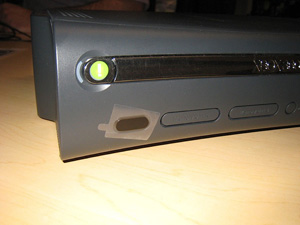 In Case you have been under a gaming rock of late you may have missed the announcement of the new SKU of Xbox 360 dubbed the Xbox Elite. Now as an early adopter I have mixed feelings about this. At this point in time it might be wise to say that this announcement would be one hell of an April Fools Joke. There that way if it turns out to be so I’m covered. Oh and the image to my left is from Xbox Live’s Own Major Nelson, Click the pic to go to his blog.
Ok on to the information, the dirty bits so to speak. 120 GB Hardrive, Integrated HDMI, Included wireless headset, and controller, both black. Now for those of us that purchased the 360 before this announcement confident that we had the best of the line there is a small tinge of regret. Microsoft here took its bearings from Apple, in their black is better tactic. The lower end models are white, an instant status symbol of having a black style machine will sell some units. Good thinking MS.

Now this announcement does not completely shut out those of us who have the Xbox Premium, but rather for a paltry sum of $179 US we can have the 120GB hardrive. 179 Dollars? That is a bit steep, admittedly you get the cable to transfer your information from your dinky 20 GB Hardrive to the new spiffy and roomy one, but seriously.

So lets not fool ourselves people being an early adopter of any game system comes with two things, first the status of having a machine which is in limited supply, secondly the knowledge that in time your machine’s original price will seem to be a cruel wallet based joke. Microsoft has taken some of the bluster out of owning the premium model. Functionality wise there are tons of reasons to pay for the Premium, especially for the hardrive. but realistically the status of owning a Premium over a core is now diminished, with the introduction of the darker cohort.

Funny how things come full circle as well. The original Xbox was black, and was largely lampooned for its design aesthetic. So inresponse the new system was sold in white. A milky testament to the new sheriff in town. Now they return to the black schema to shake things up and throw an instantly recognizable status symbol down. Well Played MS. Also I simply must add that by not dropping the prices of the other two units at the same time they probably saved themselves a huge backlash. Especially from this cash strapped gamer.

Until Next time Folks. Stay Caffeinated.

And Remember the next episode is taping on Thursday.