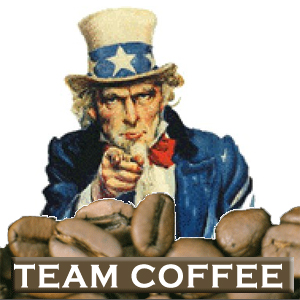 Alright this is silly, but that is the point…

Over on Twitter there was a strange missive put out by @ZeFrank concerning his allegiance to the blue team. Hearkening back to his days of summer camp and frolicking through the tulips no doubt. It took me, and quite a few other people who were not on when the message came out a few minutes to understand why there were team colors being put under various people’s profile picture.

Thus started color wars. I could not find a inclusive list of teams, nor color because frankly, zefrankly? no one had thought that far ahead. I even for a short time declared i might be interested in Team Black. Just because I like black and its the color of my coffee… Sleeping on that I decided that the only the only team I could support, while still keeping the color theme was Team Coffee!What type of color is coffee? I believe it is a shade of brown, the exact shade. Whatever roast you prefer.

I Toyed with the idea of teamCaffeine, which even has a nice ring to it. But the fatal flaw with that is that there was no color I could associate, with caffeine specifically. I am Happy to have any tea, energy drink or cola drinkers as boosters though.

Its a fun diversion I just wanted to pass the word on. We are not held back by one color, no we are legion, we are TEAM COFFEE. Go Team Coffee. Unite! Consume! Caffeinate!