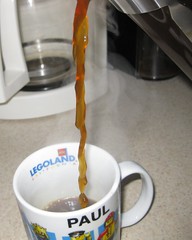 What has twitter done for you,Or Your  Business? Has it ever made you coffee? Try as i might I hadn’t been able to make twitter give me anything good, until recently that is.

Twitter has been called everything from a  frivolous  nonsense website, to a fantastic  business  tool. And on many different levels both assertions are correct. However now I have Twitter to thank for some of the best coffee I’ve had in quite a while. Thanks to the Barista On Duty a Pan Roasting Coffee Fanatic Supreme!

I was followed a while back by a likable chap who roasts his own beans as a small business. This is nothing new, the Internet is full of people who are doing just that. But what really sets Johnny Milton, the Barista on Duty apart is the way he roasts and the reason behind his method.

Johnny focuses on artisan roasting, following similar methods to the original Ethiopian practices of roasting by contact, ie stirring the beans on a hot griddle. He hand roasts each batch to the desired range, and attempts to tailor each batch to his customer’s pallet. Pan Roasted Micro lots are his bag, and his bag is fully of goodies.

As part of his upcoming birthday Celebration Johnny has culled a list of BODY rated coffee contacts that he sent samples to. I was lucky enough to  receive  a package of not 1 coffee, but rather all three coffee’s he is currently roasting. 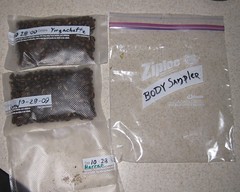 I received a set of three different beans, medium roasted, which means a medium brown color, dry with no  visible  signs of oil on the outside. AT this roast you should be able to taste the Terroir, or the region of the bean more clearly. The roast characteristics on serve to enhance these flavours at this level because the sugars are not yet caramelized.

Since the Baristsa on Duty is pan roasting he has a much closer control over the final state of the beans since he never looses sight of them. Roasting in a hot air machine, a large commercial roaster or even a bigger machine means you give up the direct control the bigger the batch and the bigger the machine.

I took notes as i went through the three different batches. I’ll share my notes with you, obviously these are very subjective, all three were brewed in a french press 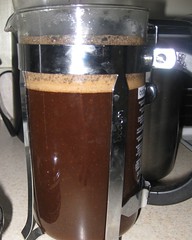 This coffee overall was the best of the three. It is quite simply one of the best coffee’s i’ve had in a long time. That includes the stuff i roast myself. To distill all the feelings down this cup is good, very very good. It has a nice full bodied taste to it, with the other hints of  flavor  only peeking through at times but in subtle ways

Yigacharaffe: by far the hardest to spell for a reviewer ;-)

This was my second favorite taste. The Yig was a great rich cup of coffee which smelled fantastic. My son thought i was making hot cocoa at one point. By far the best smelling of the three samples, not bad but needed a slightly darker roast to fully  develop  the  flavor  profile.

Of the three this one is the taste i thought could use the most work. Probably a much darker roast would eliminate the bready and vegetable tastes.

After speaking with Johnny he told me that the roasts where just a baseline and he tunes from one session to another. He has big plans and i can’t wait to see what happens.

As with any tasting these these flavors are subjective, if i drink something that i feel has a  chocolate  note to it it doesn’t mean that the coffee tastes like a machiato from SBUX, it means that there is a hint of flavour that reminds me of chocolate.

I would like to thank Johnny for letting me taste his three samples and i look forward to hearing and tasting more good things out of the Barista On Duty!