Keith From The Mind of Root Podcast has started a SysAdmin Meme, basically its a survey where blogs post their answers in response to the orginal. I was tagged… Thanks Keith. And I thought it would be a fun thing to do so here you go. I don’t know too many SysAdmins who blog outside of the people Keith already Tagged… Thanks Keith. So if your a Sysadmin and you’d like a shot and some linkage post and send me the link.

How old were you when you started using computers?

I was about 7 or 8 when we started getting computers in school. Oregon Trail was my game. Did you know Johnny died of Dysentery? A small aside kids of today couldn’t handle dysentery in a text based video game, someone would start a petition, a certain cretin lawyer would get involved and congress would have a press conference. We got a computer at home when i was around 8. We had a Commodore 64, with a ton of games from My uncle who had beat them already. Zork, Planetfall, Ultima III, IV, and V. I have the Map from Ultima V hanging in my office today.

What was your first machine?

We got a computer at home when I was around 8. We orginally hooked it up to a black and white TV, because we didn’t have a color set yet. We had a Commodore 64, with a ton of games from My uncle who had beat them already. Zork, Planetfall, Ultima III, IV, and V. I have the Map from Ultima V hanging in my office today. 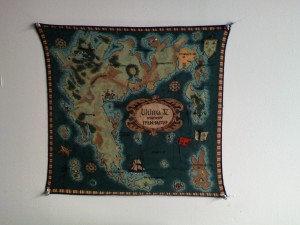 What was the first real script you wrote?

Its a tossup between Hello world in Basic, 10 goto 20 ect. And a script drawing a square in Logo. I could make that turtle dance. Even though that wasn’t until 6th grade I was very lucky in that the school I went to for elementary schol, grades k – 5. Was a Demonstration school so they tried all the new technology in the School district out there first. We had machines in more classrooms than most other schools. I think the first grade we have scheduled time on the machine was 3rd grade. 1 per classroom. Even being introduced to computers that young made them less of a mystery and we were all more willing to play around with them.

What scripting languages have you used?

Basic, Lisp, Logo, Turbo Pascal, C++ Java, Perl, and probably a couple others i can’t remember off the top of my head. I only ever took classes in Turbo Pascal, Logo, and Java. Everything else i’ve learned from doing. Either on the job or from books as I made my way forward.

What was your first professional sysadmin gig?

I didn’t start off looking to get into computers. I went to school for Anthropology, and Archeology. I ended up getting a job as a Unix Consultant at Temple as a Student worker, where i ran smaller servers and was responsible for maintenance on non mission critical machines. I also worked on the big iron but never really was responsible for it.

If you knew then what you know now, would you have started in IT?

Yes I would. I find that this field is probably more willing to accept individuality and creativity in solving problems than most others. There is a very real culture of helping others present and the freedom to share ideas and solutions is very liberating.

If there is one thing you learned along the way that you would tell new sysadmins, what would it be?

Document your code, keep a logbook of stuff you did. I spent 4 years programing things in obfusticated code only to try and revisit the solution down the line and I had to redo it. I was bad with naming variables and writing things down. Now I’m not nearly as bad but i comment all my code to a fault and i write everything down.

I was able to work on a project at temple where I collected data from a system monitoring software package called Big Brother. I collected the data and wrote a script to parse it for the amount of open machines in our massive Tech Center, 600 workstations. Now we have a Map, which i designed, which shows up to the minute seat availability for the whole lab, down to the single open seat. It was awesome to work on that project and so far it has been received very well. 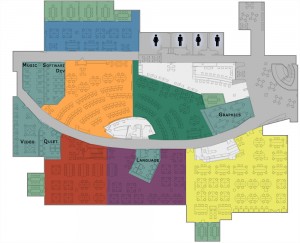 The Map: Without the Numbers

Who am I calling out?

Everyone who reads this

* This is called a cop out