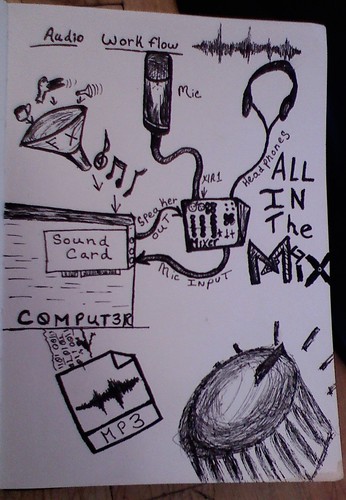 I’ve already given you a couple of tips on taking care of your voice for podcasting. But the real nitty gritty of any episode is in the mix. How the sounds end up where they do by the end of the whole shebang!

I’m not running and really fancy setup in my studio. I do however really want to reduce the amount of time i spend editing and mixing in the end. So I try my best to do everything live, just like a radio show. and fix as little as possible in post.

Every episode starts with and ends with the mixer. The Mic is piped into the first channel. I have a second mic attached to the second channel, but most of the time it’s off.I use headphones to monitor the sound in order to self modulate my own voice, and adjust the volume of any extra inputs.

I have the speaker wire coming from my comuter’s line out port right into the Auxiliary input on the mixer, this has a seperate volume, which allows me to control not only how much of the Aux signal (Sound Effects, music ect played on my computer during the course of the show.) goes through to the mix, but aalso allows me to choose how much of the aux signal is mixed into each input channel.

I then pipe the output channel on the mixer into the microphone port on my sound card. From there the entire mix is piped directly into audacity which records the mix.

Editing is all done later. Since going to the faux live setup I haven’t spent too much time editing any episodes. This in turn allows me more time to work n research and fun things and content to pass along to you. Up next we’ll have a sketchnote covering the process and applications that run the show and power the aduio you hear.

My Sketchnotes are inspired by the awesome work of Mike Rohde. He has chosen to collect some of the most awesome and interesting sketchnoters on SketchnoteArmy! I was lucky enough to have some of my work displayed there but you should really check out the rest of the great work