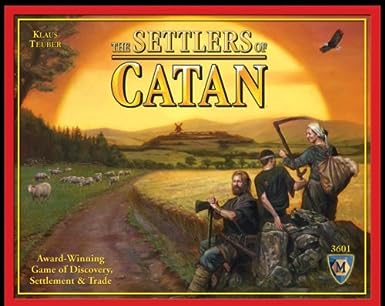 “Let them eat Catan” Mary Something or other once said… or maybe i have things wrong here…. I love the game  The Settlers of Catan

But never before have I thought about EATING the game!

Chris and Rachael Oseland (Kitchen Overlord!  Love the name) are not only apparently working on a Settlers Cookbook! But have also shown a great bit of ingenuity in putting together a breakfast buffet in the shape of the board, with hexagon shaped lab trays… i don’t want to ruin the post, so  head on over to Kitchen Overlord  to check out the rest of the goody filled trays! Now I know what to do for the next big game night throw-down. Except we will be putting the actual number of resources in each dish and when you build something… then and only then can you snack.

My friends and I love playing The Settlers of Catan

during our game nights. We have two to three sets of parents getting together to discuss life and enjoy a bit of silence while the kids watch TV, pass out in a porta-crib or run around like lunatics. Adult beverages and snacks are on hand, and we have generally a fantastic time. but this isn’t just a game to us, this is real.Hell we even pass around a pretty princess crown to the winner of each night’s festivities. We have bought two other expansion packs to make the games more difficult. (Catan: Cities and Knights Game Expansion

and Catan: Traders and Barbarians Expansion

mainly because we get a little confused as it is. Finally some games have caused actual marital problems. So we tend to tread lightly on new variants and arguments, all in good fun though.

So what say you? Battle Snacks?