I work alone, so as a coffee addict I lack certain  opportunities  that other people who work in a communal setting have. no talking around the water cooler, no chatting over coffee… But the real problem is that I make all the coffee and I drink all the coffee. I also have the clean the coffee pot. There is a lot more work involved both in consuming and upkeep when you are the only one responsible. First off let me state that I keep all of my coffee equipment at home in pristine shape. Things are always clean and the water fresh. But in the office were quantity weighs out over quality… standard for what is acceptable slip a bit. So my office coffee pot is a bit dirty… I a lot dirty in fact. I clean it roughly once a month, and even then it looks bad.

I was given the  opportunity  to try out a Product  from  Urnex, called Cleancaf. The fine folks at Urnex sent me a sample at no cost to review. The idea behind this product is that it cleans your coffee machine and  carafe with minimal fuss. I blocked off a lunch time period where I could both clean the machine and take some pictures of the product in action.

Method: By the book the directions are simple, fill the carafe with water, add in a single packet of solvent and run it through your machine. Throw the waste away. Then rinse all  components  and run clean water through the system twice throwing the waste away each time. After that is said and done you have a clean coffee pot.

The Beast: My office coffee pot which I named the Beast is just that a 12 cup Windmere  simple  as the day is long coffee pot. It probably cost around 15 dollars when it was new. The Mark fo the beast is a worn old Garfield cartoon wherein Jon gives our favorite orange cat coffee and asks how it is. Garfield’s response wide-eyed and obviously hyped up was “It Gets the Job Done” That is what this machine does, it gets the job done. it makes coffee, hot coffee.  moderately  well and quickly for what it is. It isn’t a  French  press, an  espresso  machine or anything fancy. 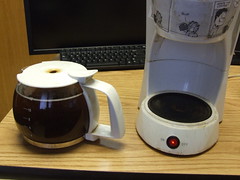 That isn't coffee. That is what came out after cleaning the machine

After running the solution through The Beast the first time I  received  a mixture which looked almost exactly like coffee… which means that there was so much sediment and build up inside the machine that i could have probably made coffee without coffee, so much for a reserve tank.

Needless to say I was a bit disgusted by what was in my coffeemaker. So I ran the first batch of clean water through after dumping the UnCoffee… That batch looked dark and gloomy too. But this time the water resembled tea instead of motor oil. So things were looking up.

Clean as Anything after the 2nd and 3rd rinses

After the second rinse the water came out crystal clean… I mean seriously crystal clean. So much so I started to notice all of the other coffee stains on the machine and had to clean it up. The whole ordeal is captured over at Flickr in a photo set, from worse to first if you will. Head on over or click on the slide show at the bottom of the article for more. I did run a third batch of water through the machine just to make sure all chemicals were out and the water was clear as anything.

This product is nothing short of amazing when it comes to cleaning your machine. Turning any Beast into a beauty, you didn’t think I was going to let that one slide did you? For a price anywhere from 3.99 – 10.99 depending on the package size you seriously can’t go wrong with this. Urnex Cleancaf beats any of the alternate cleaning method’s I’ve tried, hands down.